2022 is something of a milestone year for us, as February marked thirty years since the first release of MoneyWorks. Just for fun we’ve included some screen shots from the (almost) first version.

What’s in this newsletter

Today’s MoneyWorks is a vastly different product to the original, with features that were inconceivable “back in the day”. But it is built on the very solid architecture and foundations of the original MoneyWorks 1.0, which shipped on a single 420K floppy disk in February 1992. MoneyWorks 1.0 was for Mac only, Windows 95 being but a twinkle in Bill Gates’s eye. PC users had to wait until 1998 and MoneyWorks 2.1 before they could use MoneyWorks (and oddly, there are still people out there happily using MoneyWorks 2.1 on Windows!).

Below is a brief retrospective overview of MoneyWorks 1.0.2, which, at the risk of sounding like David Attenborough, is the oldest extant version that we know of. These are courtesy of Andrew from Capistrano Beach in California who, somewhat incredibly, has a functioning Mac SE from the late 1980’s. 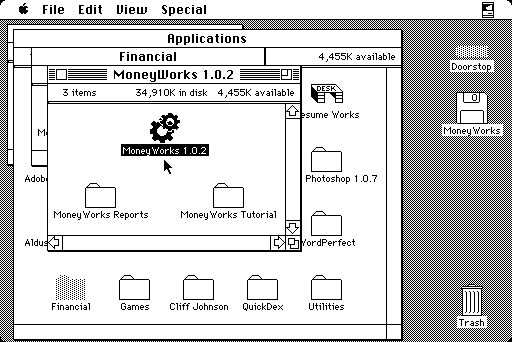 The MoneyWorks 1 disk in the Finder (the Mac SE is running System 6.0.8). It is astonishing how small the screens were on the original Macs. 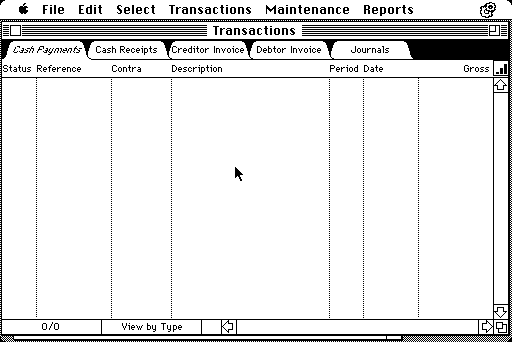 The original MoneyWorks transaction list was a representation of a filing cabinet. Unfortunately the screen shot has no transactions, but the basic metaphor has been used ever since.

The names list from the sample tutorial file, which was based on a hypothetical school. Schools were a big user of MoneyWorks (and indeed, still are). 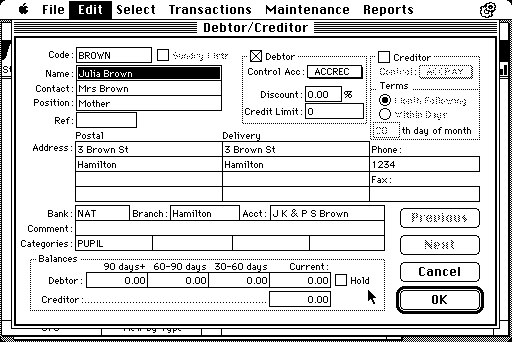 The original entry window for customers and suppliers. Now there are many more fields and options (email for example didn’t exist in 1992), which are organised over different tabbed panels.

The preferences window. Life was simpler in 1992!

The account enquiry screen. Presumably it didn’t have drill down capability in those days.

The current MoneyWorks version is the just released 9.0.8, and as usual we recommend that you update as soon as convenient. For more information see the change notes.

With the explosion in on-line sales over the last few years, many countries are requiring that you (as a supplier) collect and pay GST/VAT for on-line sales into their country, even though you might have no physical presence there. For example, you must register for Australian GST if your sales into Australia exceed $AU75,000 per annum (for New Zealand the threshold is $NZ60,000).

In MoneyWorks 9.0.8 we have made managing offshore GST/VAT handling much easier. Offshore businesses selling into Australia, South Africa, New Zealand, Singapore and the UK can use the built-in MoneyWorks Guide forms to prepare their returns, and for the last three of those countries, the returns can be submitted direct to the tax authorities using the MoneyWorks electronic GST/VAT filing. For more details see Paying GST/VAT in Multiple Countries.

If you are operating a web store based on one of these platforms, a direct connection from MoneyWorks Gold/Datacentre is now available as a MoneyWorks Service. In essence, you just click a button in MoneyWorks to download your latest sales/orders. For more information see the notes on Shopify, BigCommerce and WooCommerce.

We’ve been working with IRAS over the last few months to bring on-line submission of GST Returns (F5, F7 and F8) to MoneyWorks. This is part of their ASR+ Digital Products initiative. We anticipate this will be ready in late April, once it has gone through the final step of IRAS’s very rigorous approval process. For information on how this works see Singapore On-Line Filing.

If you have used our telephone support, you will be aware that during calls we use TeamViewer to access your screen. A problem we are encountering is that many of you are using ancient versions of TeamViewer, and these will shortly stop working.

The next time you need to use Teamviewer, start it in the normal manner by choosing Help>User TeamViewer QuickSupport. In the confirmation dialog box that opens, hold down option key (Mac) or the shift key (Windows) and click on the “Use TeamViewer” button. You will then be invited to install the newest version (after the installation is done, you need to choose Help>Use TeamViewer QuickSupport again to start the session).

Some tips on using TeamViewer

You can send emails from MoneyWorks using your local mail client only if the client supports Mac automation. These are the supported clients:

Unfortunately Thunderbird and “New Outlook” cannot be supported as they have no provision for automation.

With the end of the financial year approaching in a number of jurisdictions it might be timely to review this resource topic: What should I do at the End of Financial Year?.

If you are operating on a computer with more than one screen, you can occasionally “lose” a window–you open a Window and nothing appears to happen. This is usually caused by some physical reconfiguration of your screens, so MoneyWorks is opening the window on a screen in the last place you left it, but that screen is no longer there. Depending on the type of window, here’s how to fix it:

Posted in News | Comments Off on Newsletter March 2022