For the first time in over 30 years, the newest Mac system software comes with an all-new filesystem: APFS (replacing the venerable HFS/HFS+, which has been around since 1985). While it has some advantages, APFS drops support for certain filesystem features that Mac applications such as MoneyWorks have been relying on for over 25 years. That has required some under-the-hood changes to the way MoneyWorks manages files. These changes were made in v8.

MoneyWorks 8 has full support for APFS

MoneyWorks 8 on Mac is able to run from and open files on APFS-formatted SSDs or HDs as well as HFS+ formatted ones. As an added bonus, the changes made to support APFS also allow it use files stored on FAT32 and SMB volumes (although we strongly advise against doing so). When you upgrade your SSD-equipped Mac to High Sierra, your SSD will be converted from HFS+ to APFS, so please make sure you are running MoneyWorks 8.0.7 or later before upgrading your Mac to macOS High Sierra. Should any new compatibility issues be discovered with High Sierra, MoneyWoks 8 will receive updates to address them as necessary.

Although MoneyWorks 7 will run on High Sierra (with some issues), it cannot access MoneyWorks data files that are stored on APFS volumes, and since the High Sierra upgrade process will convert your SSD to APFS, you will not be able to open files. If your Mac has an old-fashioned spinning hard disk instead of an SSD (or a Fusion drive), the High Sierra update will retain the HFS+ formatting, so will not cause any serious incompatibilities with MoneyWorks 7 that we are aware of.

What will happen if I try to open a document on an APFS volume using MoneyWorks 7 or earlier?

Before opening a document, MoneyWorks tests the volume to make sure it supports the API that Apple previously recommended for safe-saving of data. Apple chose to drop this API for APFS. This results in the “Error -123” alert (indicating Wrong Volume type). 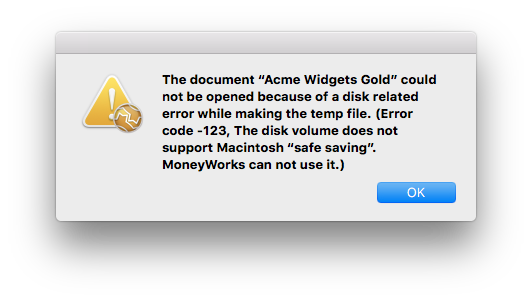 If you are on MoneyWorks 7 or earlier and wish to use macOS 10.13 High Sierra on your Mac, we urge you to upgrade to MoneyWorks 8.

If you do not wish to upgrade your MoneyWorks, you can run MoneyWorks 7 or earlier on an HFS+ volume by partioning your SSD, by using an external hard disk, or by creating an HFS+ writeable disk image. Since your boot drive would still be APFS you will get some other side effects due to APFS’s change to non-alphabetic directory ordering (your Reports menus will be in random order and the Navigator panels will be in random order).