In keeping with our commitment to Mac users, MoneyWorks 9 runs natively on Macs with Apple M1 processors. 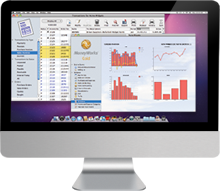 Historically, Mac accounting software has been treated as a second-class citizen by the major accounting vendors (where they can be bothered with Mac solutions at all). MoneyWorks is the standout—designed on a Mac for a Mac (but totally cross-platform), it leverages the power and ease-of-use of your Mac and seamlessly integrates with other Mac apps.

MoneyWorks is widely regarded as the being the best (and most cost-effective) Mac accounting software available, scoring top (with a four-and-a-half mouse rating) in a recent MacWorld review.

“... a product that meets or exceeds all the usual Mac native standards”
—Carol, Virgin Islands

MoneyWorks was designed on a Mac and for a Mac, and adheres to the Mac user interface guidelines.

MoneyWorks runs fully natively on your Mac. This is not a Java app or browser based, with all the trade-offs required. Instead you experience the full power of a modern Cocoa app.

Runs natively on Macs with Apple M1 processors. Up to twice as fast as running on an Intel CPU.

MoneyWorks integrates seamlessly with your other Mac software and services, including Mail, Contacts/Address Book and Enhanced Dictation. And with built in AppleEvent support you can streamline your workflow using Automator or AppleScript.

MoneyWorks has all the features you would expect in a modern accounting system, plus a lot of power features that will make life easier—whether it is something simple like free-text searching, or advanced features like the built in scripting language for enhanced customisation.

MoneyWorks also works on Windows, which is essential as it is the preferred platform of most accountants (who do tend to be a bit conservative!). So your Windows accountant (or Windows users in your own organisation) can access and update your MoneyWorks file, without messy file conversions.

In February 1992 MoneyWorks for Mac shipped on a single floppy disk.

Since then MoneyWorks has had decades of continuous improvement and enhancement.

“ I have been a Mac user since the original one was shipped to me on day 4 of its release. I have never used a PC. I have used 100s of programs, and migrated through many versions of most of them, some Mac native, some not. I HAVE NEVER, NEVER EVER found a company as responsive and helpful as you guys, with a product that meets or exceeds all the usual Mac native standards (never mind the awful Windows-to-Mac kluges). ”